What’s the first thing you see when you step up to Disneyland? The main gate, of course. And what about after that? The ticket scanner, naturally. And what else? A bunch of people taking photos in front of…The Disneyland Railroad Station. 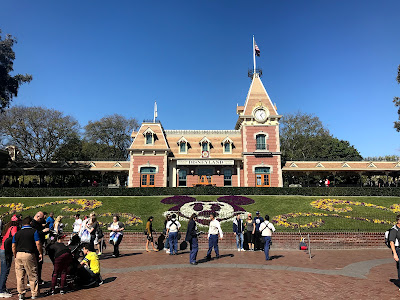 You might be tempted to blow right past the train station and get into the park. I mean, Space Mountain isn’t going to wait for itself for an hour. But you might think differently about skipping the Disneyland Railroad, if we’ve got anything to say about it. For starters,


It’s A Fun Way to Get Around the Park

Let's get the obvious out of the way: trains are a form of transportation, and the Disneyland Railroad is a train.

Disneyland is a big place. Not big like Texas, but big like, bigger than your house. And while it might not take you that long to walk to the other side of your house, it can certainly be a daunting task if you want to get to the complete opposite side of the park through all the crowds. Sure, you can rent an electric cart and beep your way through them, but that’s not what the electric carts are actually there for.

Yes, you can ride a train around all of the Americas much like a young Walt Disney would have back in the, what, 1920s? And by the Americas, I mean Anaheim, and also the future and the past. (More on that in a bit.)

By riding the train, you can get quick access from the front gate to New Orleans Square, Toontown, and Tomorrowland. Which is great if you want to get to Mickey and the Magical Map, but don't want to walk all the way to the back.


The Grand Circle Tour Is Great

The Disneyland Railroad takes you on a grand circle tour around the entire park, as mentioned above. But in the meantime, you also get to see some pretty cool stuff.

For example, on the trip from New Orleans Square to Toontown, you get a peek into the ending of Splash Mountain. You also get to take a trip back in time and see the Rivers of America from a different angle.

Fun fact: most of the cars on the trains have seats that face out to the right, so that you can see the sights better. However there’s one train, the Excursion III, that still faces forward like the original trains on opening day.
If you really want to try something historic, you can try to get a ride in the Lilly Belle, which was a very fancy caboose car that Walt designed for his wife Lilly. They don’t run it all the time and they only run it a few times a day when it’s available, so you might be able to get on board! And let me know how it is. It was built without Air Conditioning, so I’m going to guess it’s hot.

The train takes you through the Autopia area of Tomorrowland where you can get some neat views of the Autopia track itself and all of the Honda-sponsored robots. And then of course, dinosaurs, and then back to the front gate.

Oh what, you didn’t know?

There Are Dinosaurs On The Ride, I Promise

I have had this conversation in real life before:
ME: There are dinosaurs on the train!
A FRIEND: What? No there aren’t.
ME: Yes! They’re at the end!
A FRIEND: Yeah right.

And then we went on the train, and guess what? I was “yeah, right” all along, because there are dinosaurs on there. It’s called Primeval World, and it’s been there since 1966.


This was recently updated when the Disneyland Railroad was rerouted for Star Wars: Galaxy’s Edge. There’s new effects in there. Don’t let me spoil it, just get out there and start riding the rails.

And watch out for dinosaurs.