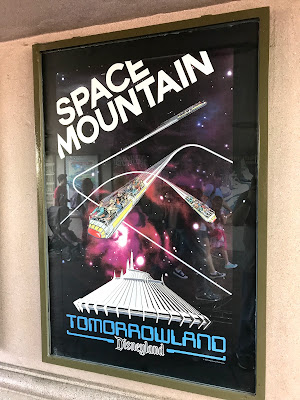 Launch Control, This is Space Center

You may not be familiar with the storyline of Space Mountain, and that is probably because they don't really make it very clear.

Space Mountain has gone through some revisions since, and the large satellite was replaced a few times—briefly re-branded as a Fed-Ex Satellite, and more recently turned into an asteroid. There used to be a projection of a giant asteroid that looked like a cookie, and everyone in my family called it the “big cookie”, but that’s gone, too. There also used to be a robot (possibly a Fed-Ex robot) at the end of the ride that would greet you on the way out.

One of these revisions of Space Mountain had videos throughout the ride queue from "SMTV”, and TV’s own Mario Lopez was featured in them sometimes. These are now gone as you don’t spend as much time in the actual queue building anymore.

Speaking of the queue building, if you look closely throughout the line, you’ll notice that the station you’re in is Station 77…which is the year the ride opened! Fun.

Story aside, the actual ride of Space Mountain itself is phenomenal. It’s also probably the first or one of the first roller coasters I’ve ever been on.

The entire ride is dark (for the most part) save for the projected stars on the walls and some lights. In 1996 the ride got music added to it—by Dick Dale, no less. In 2005 this score was replaced by Michael Giacchino’s version, AKA the guy who made you cry with the Up soundtrack.

As you twist and speed through the dark reaches of space, there comes a point in the ride where you are spiraling towards the exit (or re-entry portal, I guess). Growing up, I was amazed at how many turns it seemed to take to reach that point. (According to the official story linked earlier, this is supposed to be the inside of a spiral nebula.)

And then you reach the re-entry portal, possibly dizzy (like me), and your picture is taken, and then you have to walk up some stairs to leave (which is hard if you’re dizzy, like me). Sometimes there’s an extra surprise at the end, if you’re riding on one of the alternate-universe versions of the ride. What?

Beginning in 2007, Disneyland came up a new way to innovate: overlays. By which I mean, changing some of the projections and the music to create some familiar, but not too familiar experiences.

First, Disney teamed up with the Red Hot Chili Peppers in April 2007 to create Rockin’ Space Mountain as part of the Rockin’ Both Parks promotion (there was also a music change in DCA on California Screamin’). This featured many lighting changes to make the ride seem more like a concert vibe, and the music changed to “Higher Ground”. For some reason, they never did this again.

In October 2009, Space Mountain became Space Mountain Ghost Galaxy, borrowed from Hong Kong Disneyland. This uses a lot of the same lighting changes from the Rockin’ variant, and has some scares thrown in throughout the ride.

And then we come to my personal favorite. Hyperspace Mountain first launched in 2015 to promote the Season of the Force. This is a Star Wars themed overlay, which involves ships, explosions, possibly a TIE fighter, and of course the amazing music. Not even Space Mountain is free of becoming Star Wars.

So the next time you get to Disneyland, make sure to brave the probably-hour-long line and give Space Mountain a shot!

Just don’t trip on your way out.