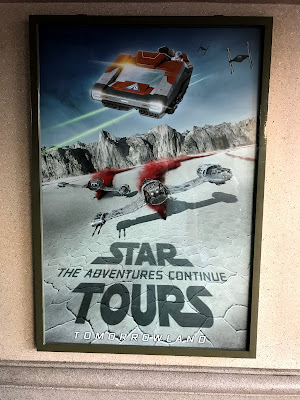 Star Wars is maybe my favorite movie series. Many people feel this way, despite some being let down by the prequels (and now apparently the sequels, according to some people). Star Wars has been a cultural phenomenon since the first movie released in 1977.

I personally didn't see Star Wars until after I had ridden on Star Tours at Disneyland, so to me this was my defining Star Wars experience (I also saw Spaceballs somehow before I ever saw Star Wars, but that's not what this article is about).

Nowadays everything is different in the Star Wars universe. The Star Wars of my youth has changed, which was already different from the original Star Wars. I'm rambling. Let's talk about Star Tours.

It's hard for me to imagine Disneyland without Star Tours, as it's always been there since I was a kid. But Star Wars wasn't always the big sci-fi IP that Disney wanted in the parks.

According to this Inside the Magic article, Michael Eisner wanted a Doctor Who ride. Really.

What he really wanted was to buy the rights to Doctor Who in the 80s, and base an attraction around it. This would have had a TARDIS--which is a Police Box that is secretly a time machine, and if you didn't know that, it'll probably take too long to explain--that you could walk into, and it would actually be bigger on the inside. I told you it would take too long to explain.

Of course this would also have meant an 80s Disney Doctor Who movie. And we may not have the current series we have now.

Thankfully, Disney got the license to make a Star Wars motion simulator ride, which replaced Adventure Thru Inner Space in 1987.

"Prepare to Be Boarded, Captain"

... And then reopened as Star Tours: The Adventures Continue in 2011. Fooled you!

The Adventures Continue variant of Star Tours moves the timeline of the ride from “after Return of the Jedi” to “literally any time throughout Star Wars history, apparently”. It’s got locations from Episodes 1 through 8.

How? Well, the new gimmick of the ride (besides 3D glasses, because of course it has those) is that each ride is ostensibly a random experience.

There’s enough random events in the ride to make 288 combinations, currently. And each time you ride, they randomly select a guest on the ride for a fun little bit in the middle of the ride.

There’s a lot of stuff going on here, and the transitions are pretty much seamless if you weren’t aware.

The random scenes also allow them to just, you know, add scenes whenever they want to.

The Adventures Continue opened in 2011. Since then, new scenes have been added featuring Jakku from The Force Awakens and Crait from The Last Jedi. So in effect, Disney can add expansion packs to the ride at their own will. In fact, to promote the release of The Last Jedi and the new scene that they added, all of the rides for a while had the new scene at the end. So everybody got a chance to enjoy it. (It doesn’t hurt that the scene and movie were both very good.)

"I've Always Wanted to Do This"

The Adventures Continue replaced the old pilot, Rex (voiced by Paul Reubens) with C-3PO, everyone’s favorite protocol droid. And they placed him inside the queue, near another fun robot who is cracking jokes.

Rex is soon going to find himself located in Star Wars: Galaxy’s Edge as some sort of DJ in the cantina. And while most of the Star Wars hype is going to be focused on the new shiny land, let’s not forget the original ride that started it all in the parks.

FussBoss on YouTube posted a recording of the original ride. It’s worth watching if you never got the chance to ride it.

Try to forgive Rex, though. He’s still getting used to his programming.