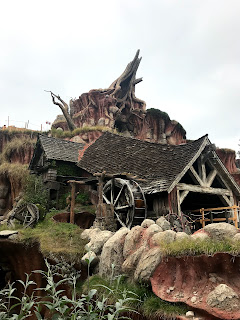 Pop quiz: how many mountains are there in Disneyland? I think the answer might be four so far: the Matterhorn (based on a real mountain), Space Mountain (which I guess counts even though you never really see the mountain in it), Big Thunder Mountain (upon which there is a railroad), and Splash Mountain.

Splash Mountain is a log flume ride that opened in 1989, based on Song of the South, a 1946 movie that has never actually been released on home video in America since its release.

You are, of course, familiar with the song. It won an Academy Award! Also, I’m sorry, but this will be stuck in your head all day.

Splash Mountain combines some of the best elements of Disneyland rides: fun animatronic characters, a great song, and some pretty good thrills. And if you want to be soaked in water, there’s a non-zero chance that you will get soaked in water.

Here’s a tip: bring a sandwich-sized bag so you can put your phone in it, and anything else electronic you might have on you that you don’t want to get wet (money, ticket, etc), because the fact of the matter is, you are going to get so wet on this ride. And not even from the drops.

The Drops Are Very Good

Q:What does Splash Mountain have in common with a dubstep song?
A: Everybody’s waiting for the drop!

Splash Mountain is known for the big 50-foot drop at the end. It’s on display before you even get into the line for the ride, and you can even see a little bit of it on the Rivers of America. But there’s several throughout the ride that are fun, too.

Take Slippin’ Falls, for example, a drop that is marked with a sign that says “Slippin’ Falls”. (I didn’t come up with the name on my own.) This is the first real drop and segues into the indoor portion of the ride. A commenter on the Internet said that this is done to help separate the logs, which makes sense. It’s also a fun smaller drop that will get you used to the idea of getting water on your glasses (if you wear glasses).

Inside the mountain is my favorite drop. And while I don’t think it has a name, it does feature the backside of Br’er Bear. So if you’re inside the mountain and you see that…then you’re there. This drop is a little faster, and actually has a part where the log dips back up out of the water on some sort of roller-coaster-like track for a split second before plunging you back into water. It’s fun and surprising if you’ve never been on the ride before, and you get a delayed reaction of water coming back into the log sometimes, which is also “fun”.

The ride eventually leads to our hero (?) Br'er Rabbit getting thrown into a briar patch. Which is apparently a good thing as far as the story goes, since I guess he lives there? (I haven’t seen the movie.) This is a 50 foot drop that will make you lose your hat if you’re wearing it. Personal experience, I don’t want to talk about it. Also, the ride takes a picture of you, shortly before you’re soaked.

Animatronic animals can be fun, and don't have to be a pizza arcade band (sorry, Rockafire Explosion). And if you like animatronic animals, you've come to the right place: there's 105 of them running around in there.

Well not literally running, that would be scary (and apparently the basis for a popular horror video game).

Many of these are from the old America Sings attraction, where a bunch of robot animals sang old timey songs inside a theater. They were repurposed for something greater: to sing one old timey song over and over again inside a mountain.

There’s a lot of memorable ones too, from Br’er Bear to the vultures that appear right before the final drop. And of course the grand finale, where all of the animals celebrate a rabbit getting thrown into a briar patch with a rousing song (it’s Zip a Dee Doo Dah).

And then, of course, my favorite one is at the end of the ride.

At the end of the ride, your picture is critiqued by the best animatronic owl, Barnaby. And then Barnaby tells you that you took a great picture. (In my mind it’s based on an owl pun or something. Like “hooty hoo hoo what a be-HOO-tiful picture!”) After getting off the ride, you’re walked through a room with screens on the walls, displaying your photos.

And then everybody takes a picture with their iPhones, provided they’re not soaking wet. (Did you put your phone in a bag? I warned you.) This isn’t really as frowned upon anymore nowadays, since there’s a code on the photo that you can use to import your picture into your Disney Photopass, so you can save it for later (if you have purchased a Photopass) on your phone in high quality. Not a bad deal.

Now go walk around the park and dry off, because you’re not getting in my car like that.


You might be tempted to blow right past the train station and get into the park. I mean, Space Mountain isn’t going to wait for itself for an hour. But you might think differently about skipping the Disneyland Railroad, if we’ve got anything to say about it. For starters,
It’s A Fun Way to Get Around the Park Let's get the obvious out of the way: trains are a form of transportation, and the Disneyland Railroad is a train.

Disneyland is a big place. Not big like Texas, but big like, bigger than your house. And while it might not take you that long to walk to the other side of your house, it can certainly be a daunting task if you want to get to the complete opposite side of the park through al…
Read more