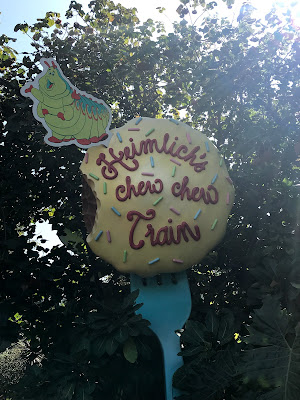 This is an emergency edition of Best Disney Things, since the entire land where Heimlich’s Chew Chew Train currently resides is going to be torn down and somehow turned into a Marvel-themed land. And as excited as I am about that, I’m less excited that they’re going to have to get rid of the Heimlich ride.

Heimlich's Chew Chew Train opened in 2002 with the rest of A Bug's Land, which was built around the already existing theater for It's Tough To Be A Bug--one of the original attractions at DCA's opening in 2001.

Mein Stomach is So Empty


For those of you who haven’t seen the movie A Bug’s Life, Heimlich is a large caterpillar that likes to eat, and is also somehow German. And he talks with an amazing accent. More on that in a bit.

Like everywhere else in A Bug's Land, you are supposed to feel like you have been shrunken down to the size of a bug. In this instance, you're riding with (or on?) Heimlich, like a train, as you help him find something to eat to fill his stomach.

If you're a big fan of theming, this is a great ride. The food is enormous (though the scale may be off, unless the animal crackers are just supposed to be that much smaller than the candy corn) and there's even scents wafting through the air for many of the food items.

Now granted, this is basically a ride for small children. But Disneyland was pretty much made for small children, and it seems like A Bug's Land filled this requirement for DCA. What are the kids gonna do without a train that rides through a huge watermelon? Spider-Man can't do that, since he's not actually a spider.

The ride isn't just a fun ride through a bunch of food, however.

That's my attempt at a joke that would fit in with the rest of the ride, because Heimlich tells jokes about the food the entire time. And yes, he says everything in that accent, because it is hilarious.

Heimlich will tell you all about how much he loves all of the food you drive through as he apparently has already taken huge bites out of it.


Bonus fun: Heimlich reading the safety instructions in Spanish. I wish I had a recording of that.

A Bug’s Land is set to close down by the end of summer. The theater for It’s Tough to Be a Bug is already closed, and the days are numbered for the rest of the rides.

If you’d like to experience Heimlich’s Chew Chew Train, SoCal Attractions 360 posted a video ride through. And while it’s not exactly the same (those animal crackers really did smell great), it’s a good way to see it since it’s not going to exist anymore. (While you're at it, go ahead and subscribe to their channel, since they always post cool videos like this.)


I miss you already, Heimlich. 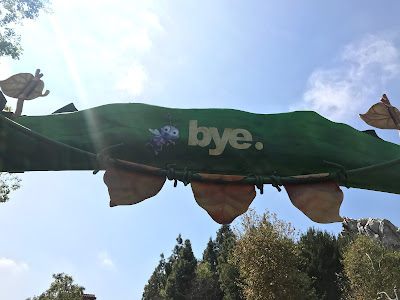